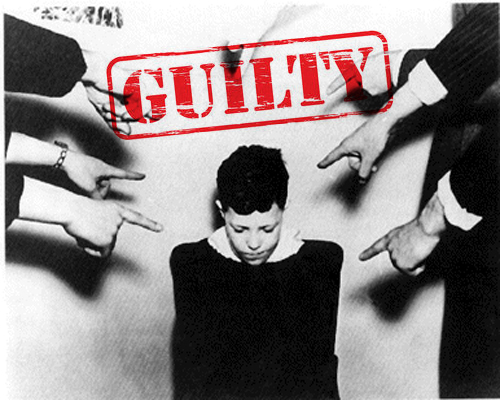 GUILT BY ASSOCIATION: The attribution of guilt to individuals because of the people or organizations with which they associate, rather than because of any crime that they have committed.

I’ve only been around for about a half century, and in my time here on earth, I can’t remember anything like what we are experiencing. Last week’s blog was on the heels of an incredibly tough election year and I posted that although I did vote, my hope and faith is and will always be in the King of kings and that will never change.

What is interesting a little over a week after the election is the guilty by association vibe that is happening from a select group of people in America. There are many opinions and reasons, but what it mainly is coming down to is, if you are for a certain person, you are no better than that person.

Here is where that mindset is flawed and completely an attack from evil itself.

For those of us that are parents.  If your child (God forbid) did some heinous crime like murder, child predator, espionage.. racist leadership…..whatever…. For some in the offended group, they would find it hard to separate you from the issue of the other person.. I’ve seen many people shunned as a result.. But, as a parent.. I would stand with my child.. their issue or issues are not why I have relationship. The relationship has value regardless of issue.

Okay.. another example.. I have many friends who have completely different outlooks on life than me as I am sure you do as well.  Be it spiritual, cultural, relational etc.  I have friends that hate other ethnic groups, that hate other sexually orientated groups and yet they are still my friend.

So.. the guilty by association wrap that is happening in our culture is strictly a situation of convenience.  A place where a people group is not willing to, for the better of the whole, figure a way to live.

To see young people, college age people and adults (some who can’t even vote, or better yet defiantly choose not to) complain, whine, get special grief treatment is some kind of morph we haven’t seen before. This totally reminds me of:

2 Timothy 1-5 (The Message) Don’t be naive. There are difficult times ahead. As the end approaches, people are going to be self-absorbed, money-hungry, self-promoting, stuck-up, profane, contemptuous of parents, crude, coarse, dog-eat-dog, unbending, slanderers, impulsively wild, savage, cynical, treacherous, ruthless, bloated windbags, addicted to lust, and allergic to God. They’ll make a show of religion, but behind the scenes they’re animals. Stay clear of these people.

6-9These are the kind of people who smooth-talk themselves into the homes of unstable and needy women and take advantage of them; women who, depressed by their sinfulness, take up with every new religious fad that calls itself “truth.” They get exploited every time and never really learn. These men are like those old Egyptian frauds Jannes and Jambres, who challenged Moses. They were rejects from the faith, twisted in their thinking, defying truth itself. But nothing will come of these latest impostors. Everyone will see through them, just as people saw through that Egyptian hoax.

We are living in these days.. NOW. I would encourage you to read the rest of that chapter as well. My friends.  We have a very real enemy. His name is not Donald J. Trump or even Hillary R. Clinton…. His name is Satan. He wants to divide, destroy and denigrate anything that even comes close to looking like God.

If you are in a situation that you are publicly bashing, complaining and ranting (in person or loudly on social media.. I read your posts…..) and definitely doing it way more than you are providing your stand to stay strong in the fact that you serve the King of kings, that your hope is not in a government official, but in the one who created it all. If you are more bent out of shape proving your point about who should be in office and why vs. someone who died for that person and they could be eternally changed forever… you my friend are out of balance and suffer the same fate you preach to others.

What are you pointing to or towards today? If it was your last day on the planet, what was the thing you fought for to the grave?

We live in a difficult time, no doubt. My friends, if you are a follower of Jesus, I want to encourage you to do just that today. Examine your motives, examine your speech and in all your effort, may your life be a billboard that speaks…. #GodsGotThis