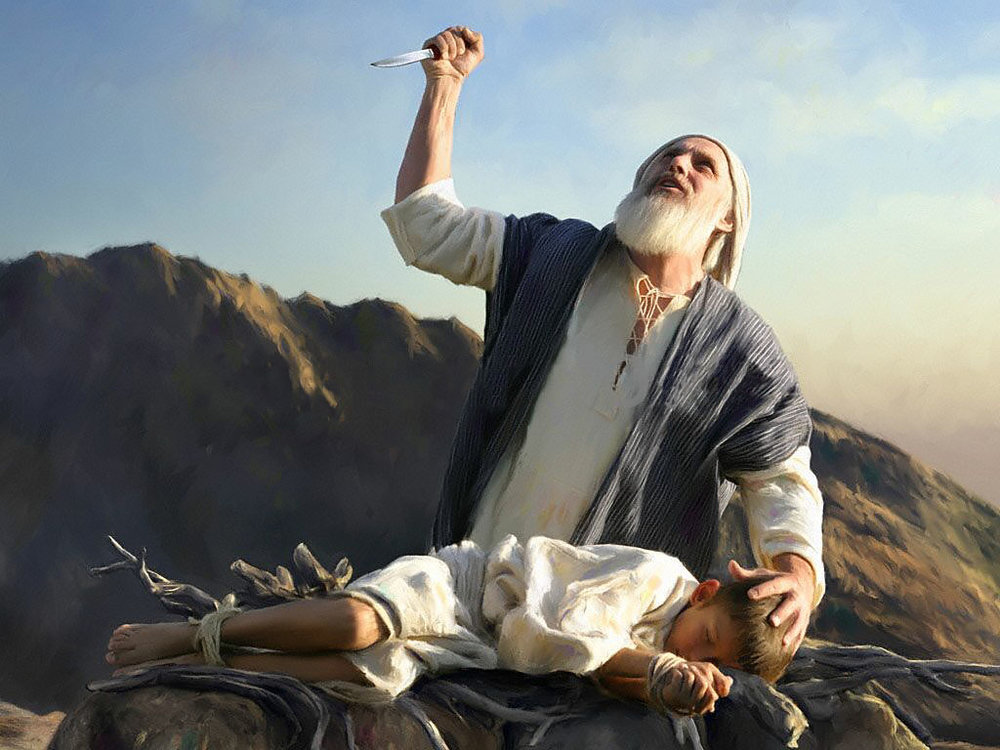 9 When they arrived at the place where God had told him to go, Abraham built an altar and arranged the wood on it. Then he tied his son, Isaac, and laid him on the altar on top of the wood. 10 And Abraham picked up the knife to kill his son as a sacrifice. 11 At that moment the angel of the lord called to him from heaven, “Abraham! Abraham!” “Yes,” Abraham replied. “Here I am!” 12 “Don’t lay a hand on the boy!”

God has shown me a different perspective today on Abraham’s sacrifice at the altar.  Have you ever wondered what Isaac was thinking?  What he was going through?  Do you think he was kicking and screaming at the top of his lungs for his dad not to kill him on the altar??  I wasn’t there and that part is not written, but, as a father myself:

1.  I don’t know if I could ever do that with my son.. Abraham’s faith and trust was incredible and…

2.  My son would have been freaking out!!!  Knowing how my son would have been having an issue with me putting him up on an altar tying him up in ropes and raising a knife to him.. He’d have been crying, screaming, squirming.. you get the picture…and if that was the case and me as a father dreading to kill my own son and having to deal with his fear and anguish.. I DON’T KNOW IF I WOULD HAVE HEARD AN ANGEL AT THE LAST MINUTE SAYING STOP!!!!!!!!!!!!!!!!

I have to believe that Isaac wasn’t screaming and freaking out, I’m sure he was scared, but if Abraham was able to focus on what he was doing and stop the thrust of a knife…. the environment had to be calm enough to hear.  Isaac’s faith in his father and in God must have been HUGE!!!!!!!!!!!!!!!!!!!!!!!!!!!!

Today I feel like I have had to be Abraham and Isaac over the past year in my own life.  I have proclaimed that #GodsGotThis for so long and have been trusting in Him for my healing and I also had to be Isaac and be willing to lay at the altar and trust that #GodsGotThis no matter what happens.

Yesterday, when my doctor said she couldn’t explain the reason for my tumors shrinking to an exact point (it was radiation, it was treatment, it was both things) because I went 1 1/2 months with NO TREATMENT.  I had to go to the altar.  And just when the knife was to be raised and I submitted to the process, completely trusting God.. a voice from heaven said STOP!

It is hard to explain my emotion of this moment. A place like Abraham, walking a tough path up a steep mountain saying.. some how.. some way.. #GodsGotThis and a place like Isaac where I just sit calm, rest and trust in my faith and the faith of another that #GodsGotThis.

Even though the cancer is not physically gone completely, even though I still have tumors in my body, to actually hear

and see God move in a place where there is no clear explanation… Can you imagine how Isaac felt coming down from the mountain with his father.  Do you think Isaac could or would ever be in a place where he wouldn’t think God would move on his behalf?  Oh.. we all struggle.. I do.. It’s not easy to always walk in faith and we waiver.. WE’RE HUMAN. But Isaac would never be the same!

I hope that the story of my life and what is going on will help you see how to trust in God, to help me remember to trust in God and to walk with faith like Abraham and Isaac.. two different yet POWERFUL kinds of faith.

We must Go to hear stop…